Where to live in Melbourne 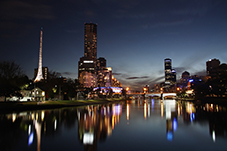 It sounds pretty obvious, but the one thing you’ll need to plan carefully before you leave is where to live in Melbourne. But with so many places to choose from in and around Melbourne you might need a little help narrowing it all down…

1. Southbank: As you would expect for the city’s Central Business District, Southbank is dominated by high-rise buildings and houses the headquarters for some of Melbourne’s biggest businesses. Business aside, this is one of the most densely populated areas in the city, with lots of luxurious apartment blocks.

2. Carlton: A lively, diverse area that’s traditionally home to the Italian community and is thus famed for its authentic Italian-style restaurants and cafes. That aside, Carlton is an area rich in retail, entertainment and leisure, as well as providing some of the city’s best educational opportunities in University of Melbourne and the Royal Melbourne Institute of Technology.

3. Kensington: A quirky, predominantly residential area of the city that’s village-like in its overall feel. A big mix of property on offer here – from small period housing to modern flats and townhouses – that’s interspersed with unique local shops.
Also home to Flemington Racecourse, the Melbourne Cup and the Royal Agricultural Showgrounds.

4. Parkville: Leafy, tree lined streets with beautiful heritage houses define the Parkville area, along with the Royal Park (Melbourne’s largest area of open space) and the Melbourne Zoo.
It’s worth noting that this is also home to the University of Melbourne’s campus, so has a high student population.

5. Docklands: An area that’s still undergoing major development, the Docklands is Melbourne’s newest suburb and is set to become one of the most vibrant. Similar in size to the Central Business District, the Docklands is already home to bustling marinas, parks, waterfront restaurants, shops and centers for research, education, technology and business. Once development is complete, it is hoped that the Docklands will house over 20,000 residents in the 8,000 new apartments planned.

6. South Yarra: Set next to the Yarra River, this is an area rich in beautiful period housing, lots of parks and gardens (including the Royal Botanic Gardens), The Alfred Hospital, a mix of convenience stores along the Domain Road and lots of popular restaurants and cafes.
Sporting types will love the facilities on offer here – with the Olympic Park and Melbourne Park situated here there are a steady stream of events (like the Australian Open Tennis Championships, for one) held all year round.

Melbourne’s major bayside beaches (Port Melbourne, St Kilda, Elwood, Brighton, etc) are, for the most part, located in the south-eastern suburbs of Port Philip Bay. If you’re after a slice of the classic surf life, then head south-east of the CBD for Rye, Sorrento and Portsea.

For more information on moving to Melbourne or anywhere else in Australia, check out the rest of our guide to moving to Australia