Where to live in Chicago: Newcomers Guide 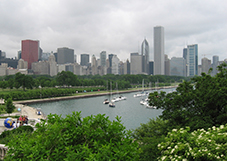 Famous for its musical interpretation, Chicago is a city with lots to offer. If you’re about to move then you’ll probably be considering where to live in Chicago trying to narrow down which neighbourhood is best for you – and with so many to choose from, it’s not an easy task…

Andersonville: Located on the northern side of Chicago, Andersonville is one of the city’s most popular neighbourhoods. Once famous for its predominantly Swedish community, this is an area now dominated by a wealth of different and varied cultures from across the world. The community here ranges from your average family with children right through to a vibrant population of lesbian, gay, bisexual and transgender residents. The quirkiness of the area is the perfect backdrop to a host of unique shops, restaurants and service providers. There are still echoes back to the days when Swedish immigrants dominated the population, with a host of Swedish bakeries and delicatessens paying homage to the roots of its ancestors.

Uptown Entertainment District: As the name might suggest, this area is not for those who are after the quiet life. Popular with tourists, here you’ll find various music venues, nightclubs, restaurants and shops – all of which are currently experiencing a bit of a revival. Amongst all of this, you’ll find some famous landmarks – the Aragon Ballroom, Riviera Theatre, Arcadia Ballroom and 5100 Club to name but a few.

The Magnificent Mile: This mile-long stretch of city, which spans the length of Michigan Avenue from the Chicago River to Oak Street in the Near North side is the main thoroughfare between Chicago’s Loop Business District and its Gold Coast.
This is section of the city is currently regarded as Chicago’s main shopping district, and houses over 450 mid to high-end shops across a 3,100,000sqft radius. With its mix of luxurious department stores, restaurants, chic boutiques, hotels and commercial and residential buildings, it’s no wonder this is dominated mostly by those affluent enough to be able to afford the house price here and tourists who are after some retail therapy.

West Ridge: A thriving, multi-ethnic community area, West Ridge is considered one of Chicago’s middle-class neighbourhoods, which is defined by its historic mansions and cultural institutions.

The Loop: This is one of 77 designated community areas the historic commercial centre of Downtown Chicago, which borders the city’s Central Business District. The Loop is the second largest commercial business district in the United States, after New York City’s Midtown Manhattan. It’s also the seat of government for Chicago and Cook County, as well being home to Grant Park and the Art Institute of Chicago (one of the largest art museums in the United States). Other major cultural institutions which find their home here include the Chicago Symphony Orchestra, the Goodman Theatre, the Chicago Cultural Centre and the Joffrey Ballet.
Several notable locations within The Loop include:

If you're looking for a company to help with your international shipping to Chicago please don't hesitate to get in touch, we're happy to help.