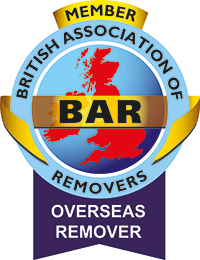 The British Association of Removers has provided the following advice regarding the impact of currency exchange rate fluctuation on International and European removals.

Guidance from the BAR

Recent fluctuations in the value of the Pound Sterling against other major currencies following the UK mini-budget on 22nd September may have an effect on costs faced by customers moving internationally, and it would therefore be helpful for customers to understand why this would be.

Sea freight rates are generally based in either US Dollars or Euros, and any destination services to be provided are normally based in the local currency or in US Dollars. The cost of these in sterling will only be fully known at the time of invoicing.

Removal companies cannot predict the rates of exchange that will apply at an unknown future date, and so, when a customer in the United Kingdom is quoted for their removal, their removal company will usually have converted both the sea freight and destination costs to Sterling at the time the quote is given.

However, as it can be months before the actual move takes place, changes in exchange rates can mean the final cost of the service in Sterling can increase even when the base cost in foreign currency remains unchanged; while normally this may mean only small movements in the overall cost, if there are large fluctuations in the exchange rate markets as seen recently, this can lead to larger increases.

Unfortunately, any rise in costs would need to be passed on to customers; any such increases due to changes in exchange rates would be outside the control of the removal companies and would be due to the economic landscape in the UK and how this is perceived by global financial markets. The BAR would like to assure customers that removal companies will be doing everything they can to reduce the impact of these changes, and we also hope that the financial markets will start to settle again in the coming weeks.