Finding a school when emigrating to the USA 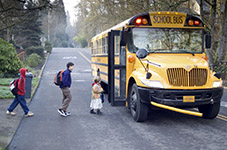 Finding a school when emigrating to the USA will be top of your list of priorities if you have kids. Moving with children is always difficult, but when you’re moving internationally there’s a lot more to think about – not only will you have to settle your offspring into a completely new way of life with new languages to learn, new friends to make and new food to get accustomed to, but you probably also need to find them a new school. So where should you even begin?

Types of School in the USA

The education of all children is compulsory in America from the ages of 5 to 18 – though the ages at which it becomes compulsory are entirely state-dependent.

Most education is provided by the public sector, and funding comes from state, local and federal authorities. Higher education is available in all states, with a mixture of publically and privately funded institutions. It’s important to note, however, that the USA does NOT have a national school system in the same way that we do here – each state has its own school laws, therefore what your child learns will depend entirely upon where you choose to live.

All public and private schools in the United States are divided into three levels – elementary school, middle school (or junior high) and high school. At each of these three stages of education, children will be divided into grades according to their age. Most children will enter into the public education system at around 5 or 6 years old and will pass up through the various stages to finish their final year of high school at around 18 years old with a high school diploma.

Following high school, pupils can opt to extend their education by going to college, where they will specialise (or ‘major’) in one or two subjects that will define the career path they choose to take.

The terminology used to define each school year – or ‘grade’, as you’ll find yourself calling it – is very different to what we’re used to in the UK. As a general rule, this is how the American’s use a child’s age to determine their school year and what they call them:

School Years in the USA

Most traditional school years in America begin either at the end of August or the day after Labor Day in September and run through to mid-May or late June. Terms are divided into sections, as they are in the UK, and children are granted an extended break over the summer, called a summer recess.

Aside from the summer recess, two other most notable breaks you’ll become familiar with are winter vacation, which falls in December and lasts around two and a half weeks, and Spring Break – a week off in late March which is very popular with older students in particular.

Generally, children will usually pass up through the 12 grades of the school system with the same class each year, give or take a few new additions.

In most parts of the United States, children are expected to attend school five days a week (Monday to Friday), for nine months of the year. A full school day is typically around 7-8 hours, including lunch breaks.

One of the major characteristics of American schools that’s not present as strongly anywhere else in the world is the emphasis placed on sports, clubs and extra curricular activities – and not just by the schools, but by the parents and local communities as well.

It’s not unusual for students to dedicate much of their free time to sports clubs, drill teams and bands. Students are fiercely loyal to their school’s sports teams and spend a lot of time either playing for or supporting them. This drives a lot of competition between local schools – so much so that most states have organisations specifically in place to monitor the competition between groups and implement rules on the time allowed to practice in preparation for matches and events.

Competition intensifies during college years, with college athletics (basketball and football in particular) generating millions of dollars’ worth of business every year in the US. Many of the star players at college go on to develop professional sporting careers.

If you need help finding a school when emigrating to the USA find out more about our Relocation Assistance services.
If you're already planning your move get a free quote for removals to the USA.