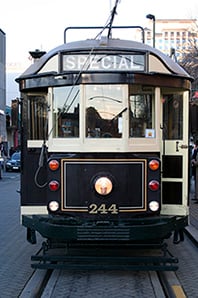 One of your main concerns about moving to the other side of the world might revolve around commuting in Christchurch to get to work or generally just get around in the city – but don’t worry; wherever you settle in Christchurch, you’ll be pleased to know that the transport links for commuting in, out and around the city are excellent.

1. Cars are without doubt the most preferred method of commuting in Christchurch, although cycling isn’t far behind, with around 7% of commuters opting for this particular method. Cycling has gained even greater popularity since the 2011 earthquake, with Christchurch City Council making the sustainability of cycle paths and lanes a top priority. If you’re coming from the UK or another Commonwealth country then you’ll be pleased to know that vehicles here also drive on the left hand side of the road – something which might make your first driving experience in Christchurch a little less daunting, should you decide to bring your own car.

2. Buses (known as the Metro) run regularly throughout the city, with a special (environmentally friendly) electric hybrid service - the Shuttle - serving the central inner city, which is completely free to use. Buses are the most popular and convenient method of public transport around Christchurch. Fares are standardised between the two companies that operate their services, and passengers can buy a Metro Card which discounts the price of regular journeys. The tramway system established in 1905 which used to run a circuit of the central city (mostly for tourists) was forced to close following extensive earthquake damage sustained between 2010-2012.

3. One of New Zealand's best-known rail services, TranzAlpine, passes through Christchurch on its way through from the South Island to the West and is mainly used by tourists. The scenery along this route is so astounding that it's considered to be one of the top ten scenic train journeys in the world. Commuter links in Christchurch were progressively cancelled between 1960-1976, and the majority of all the city's rail traffic is now freight. There is only one passenger railway station currently serving Christchurch, which can be found in the suburb of Addington. Bear this in mind if you are currently used to commuting via train daily here in the UK, as it's more than likely you'll find yourself having to adapt to a new way of getting to work once you're settled in Christchurch.

4. If you want to get somewhere in a hurry then the city’s taxi service is excellent – there are a number of reputable companies which offer services around the clock and fares for all of these are standardised, so you’ll be able to work out roughly how much your journeys will cost you once you’ve used them a few times.