Removals and Storage for DIY SOS: The Big Build

In September and October 2014 Bournes Home Moves supplied packing, removals and storage services to a family who will be featured in the BBC One series 'DIY SOS: The Big Build' to help transform their home in Longfield, Kent.

DIY SOS: The Big Build is a one hour programme in which the team, led by presenter Nick Knowles, enlists the help of local tradesmen, suppliers and the larger community to help deserving families.

Jenny and Scott’s son Charlie had severe brain haemorrhaging at birth and suffers from spastic quadriplegia. Meningitis and Pneumonia compounded Charlie’s problems. Now he spends life in a wheelchair with very little voluntary movement. He’s registered blind, has epilepsy and he is unable to regulate his own body temperature. The family, including Charlie’s two older brothers Danny and Bradley, were bursting out of their small end of terrace house and their home had become a major obstacle in living their day to day lives, which is where the DIY SOS team stepped in!

We won’t reveal any of the details until the series airs (date to be determined) but we can say the results will literally change their lives. Tom Bourne and Kirsty Parsons from Bournes were privileged to be invited to the big ‘reveal’ today where the family were welcomed back to their home by the team and all the trades involved in making the transformation happen. This was one of the biggest projects the show has taken on and we promise it’s an awesome one and the family could not have been more grateful and pleased with their new house, which can now be a real home for all of them. 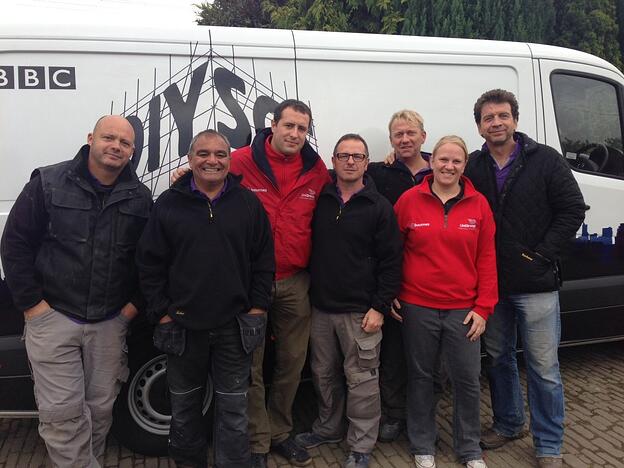 Kirsty and Tom join Nick Knowles and the team - (Julian, Billy, Mark and Chris) at the big reveal

The project was a combination of the kind donations of time, materials and equipment from trades across Kent who turned out in their masses to lend a helping hand wherever they could and as a local removals company operating in the Kent area our crew (Tom, Aaron and Kelvin) were only too happy to help clear the house and store all the family’s belongings before the project kicked off so that the rest of the trades people could step in and get their jobs done.

We’d like to say a big welcome home to Charlie, Jenny, Scott, Danny and Bradley and a big well done to the DIY SOS team and all our local trade friends throughout Kent that made it happen. It was our pleasure to be a part of it and we look forward to seeing the episode when it airs, watch this space for more information!

Find out more about Bournes Removals in Kent