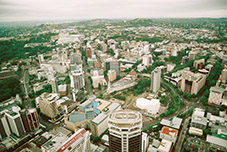 If you're currently considering moving to Auckland then you'll probably be spending a lot of your time thinking about what your new life will be like and how it will differ when you get there. One of the key ways to settle in quickly is to immerse yourself in the local culture and activities - and luckily for you, there are plenty to keep you occupied. Here's our quick guide to the lifestyle in Auckland...

90% of Auckland’s population live in urban areas, despite nearly 70% of the land area being rural, so there’s a strong city vibe throughout the country.
The mild climate and reasonable cost of living coupled with good opportunities for jobs and education has made Auckland one of the most sought after places to live in the world. Consequently, you’ll never be short of a thing or two in and around the place you live:

Despite the city surroundings, Auckland is often referred to as the “City of Sails” and many inhabitants are keen sailing enthusiasts.

If sailing isn’t your thing, but you still love being by the water then there are several hotspots for swimming or sunbathing in Waitemata Harbour – try Mission Bay, Davenport or Takapuna for beautiful beaches, or if you want to surf then head to the West Coast for Piha and Muriwai.
If you’re more of a shopper or bar hopper, then you might like to check out Viaduct Basin. There’s plenty to see and do here – whether it be eating out in one of the cafes or restaurants, or perhaps spending an evening at one of the many vibrant clubs.
Beaches and bars aren’t for everyone though; if you prefer the quiet life then you’re in luck – there are plenty of beautiful parks to enjoy in Auckland. Packing a picnic or taking a leisurely stroll through any of the city’s major parks (Albert, Victoria, Myers or Western) is a day well spent, particularly if you have children or are lookingfor cheaper alternatives for a day out.

Music and Art in Auckland

Art lovers won’t be disappointed here; there are a whole range of places to quench your thirst for culture when settling in to a new lifestyle in Auckland:

One of the things that you'll definitely pick up on when moving to New Zealand is that like their Australian cousins, the Kiwis are particularly keen on rugby union and cricket. Rugby league, soccer and netball are all other popular sports played in Auckland, along with beach sports, swimming, tennis and badminton.
If you’re not so keen on playing sport but like to watch, then these are the places you need to know about:

If you're moving to New Zealand  - be it Auckland or anywhere else - you can get a free quote for your move by clicking the button below: