How to use public transport in New York 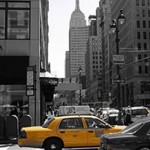 With more than 12,000 iconic yellow cabs, a subway service, buses and the Staten Island Ferry, New York’s transport system is the most complex and extensive in North America. If you’re sacrificing your car upon your move here then you might be worried about how you’ll get yourself from A to B each day – but don’t worry, it really couldn't be easier…here's our guide to How to use public transport in New York


1. Possibly the form of public transport most synonymous with New York, the yellow taxi cab will be your new best friend. If the light at the top of the cab is on, then you’re free to hail it – just beware that you might not be the only one; taxi etiquette here is completely different and something that might take a while to get used to. Fares start at $2.50 and increase according to distance traveled and time spent waiting in traffic. In August 2013, green cabs were also introduced to the city, and are designated for passengers in Upper Manhattan, the Bronx, Brooklyn and Queens only.

2. If you’re not using a cab then it’s likely the subway will be the transportation of choice for your daily commutes. New York City Subway is one the busiest in the western hemisphere and boasts the World’s largest railway station in Grand Central Station. You can get just about anywhere on the subway, which serves all of the districts and boroughs in the city on a 24 hour basis. If you’re using the subway regularly, then a good money-saving tip is to buy yourself a metro card. Not only does this make traveling on the subway cheaper, it can also be used on the city’s buses too.

3. Similarly, New York also boasts an impressive bus service – the largest in operation in the whole of North America, in fact. Via bus, you’ll be able to connect to pretty much anywhere else within the tri-state region.

4. One of the other key components of public transport in New York is the Staten Island Ferry. With over 20 million passengers carried annually on the 5.2 mile journey between Staten Island and Lower Manhattan, the ferry service links up with the Staten Island Railway to provide further transportation to areas in New Jersey, Hoboken, Jersey City and Newark.

5. And if you don’t want to use public transport? Why not join the 120,000 other people who cycle around the city on a daily basis – you’ll get fit and find your way around New York in no time! Due to the numbered grid system on which it’s built, New York is actually incredibly easy to navigate by bike or even on foot.

For more information on moving to New York or anywhere else in America, check out our blog and International Removal pages.