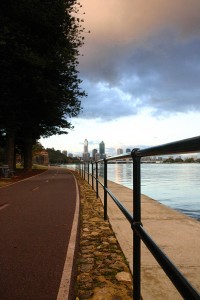 If you’re confused about how you’ll get around when you move to Perth then here’s our quick guide on public transport in Perth. Moving to the other side of the world can be a challenging enough task without the added worry of trying to get your bearings once you’re there.

1. Traveling by Rail in Perth

With 70 rail stations and an average of 1,000 train services each day, you’re almost spoilt for choice when it comes to train travel here. The rail system for public transport in Perth has recently undergone significant redevelopment, making the length of the railway system twice the size by adding a new line between Perth and Mandurah. Lines between Perth, Adelaide and Sydney are run by the Indian Pacific passenger rail service, whilst any lines between Perth, Kalgoorie and the external towns are run by Transwa Prospector.

2. Traveling by Bus in Perth

Most of the buses providing public transport in Perth are run by TransPerth. And with more than 11,200 scheduled services each day, travelling by bus is one of the most common and more preferred methods of transport by commuters (not to mention school children, who can catch one of 400 services that run daily). Recently, the SmartRider contactless ticket system has been introduced, which works much like the Oyster card system used here in the UK and saves passengers time and money. If you’re travelling around the city centre, you’ll notice that there are several zero-charge bus fleets in operation – these are part of the city’s Central Area Transit (CAT) systems and shuttle people around the ‘free transit zones’ along three major routes. Access facilities for disabled and senior customers or those with prams is excellent here, and has even won TransPerth some major awards in recent years.

3. Transport by Air in Perth

If you’re planning on coming or going via air, then you’ll become quickly frequented with one of the two major airports here - Perth Airport is used for regional, domestic and international flights in the east, while Jandakot Airport is for more general and chartered flights.

4. Public transport in Perth by Sea

Whether you’re using them to commute daily or just want a day trip out away from dry land, you’ll be pleased to know that over 80 ferry services a day run from the city in the height of the summer, and are only very slightly downgraded during the winter months.

Bringing your own car with you? If you don't need to use public transport in Perth then you'll be pleased to know that travelling by car around here is pretty simple as everything is so well connected. And driving here is made all the more simple by the fact that Australians also drive on the left hand side of the road, so at least that’s one less thing to worry about should you choose to bring your car with you!

Need more help with your move to Perth?

For more information on moving to Perth or anywhere else in Australia, please see our Moving to Australia homepage.

Ready to move? get a free, no obligation quote for removals to Australia