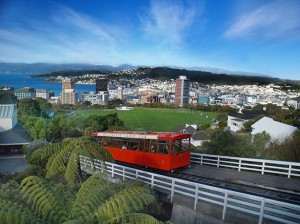 Public transport in Wellington, New Zealand can be hard to negotiate at the best of times – but when you’ve just moved to the other side of the world and are struggling to adjust to all the other quirks of your new neighbourhood, it can be even harder. If you’re moving to Wellington and worried about how you’ll get about when you’re there, then here are our top tips for getting to grips with public transport…

Bus: By far the most popular way to get around in Wellington is by bus. With such an extensive network covering the city, you’re almost guaranteed to be able to catch a bus anywhere, at any time of day. There are a number of different buses running across Wellington, most of which are owned by Metlink (which runs an excellent website that allows you to plan journeys and get up-to-date travel and fare information). If you think you’ll become a regular bus user for your daily commute then it’s definitely worth investing in a Snapper Card. The Kiwi equivalent of an Oyster Card, the Snapper is a pre-paid card that allows the user to hop on and off the bus without having to stop to pay. The tag on/tag off system means it calculates the right fare for your journey, and those who use certain buses will receive a 20% discount on fare prices by using a Snapper – not to mention it can also be used to pay for taxi fares, as well as low-priced items like newspapers, coffees and sandwiches.

Rail: There are currently 49 stations in Wellington’s rail network, with Wellington itself the busiest. The rail network comprises two major corridors across the city – the North Island Main Trunk and the Wairarapa Line – and is used mostly by commuters coming in and out of the central city. For journeys elsewhere, Wellington provides four other services across the city to the outer suburbs on its passenger trains – which are the only electric trains in the whole of New Zealand.

Air: Located just over 3 miles from the city centre, Wellington International Airport provides a great option for short-haul flights in and around the country, with regular domestic flights to all other areas of New Zealand, Australia and the Pacific Islands. If you want to fly any further afield then you’ll need to book your onward journey from one of these other airports.

Ferry: Although not as popular as it once was, Wellington's ferry service – which crosses between the east and west coasts – runs up to 16 times a day, making this a great option not only for commuters, but also for those wanting to explore different parts of the island without the need to drive.

Cable Car: Wellington’s funicular cable car is as much a popular mode of transport as it is an iconic landmark. Used by commuters, visitors to the city’s Botanic Garden and students at Victoria University alike, the cars journey between the central city and the suburb of Kelburn several times a day.

Car: If public transport in Wellington isn't for you or If you’re thinking of taking your car with you when you move to Wellington or buying one when you get there then you should probably be aware that getting around by car isn’t the easiest thing to do here – at least not at first, or unless you’re extremely used to driving narrow, hilly terrain on a regular basis. That said, the city is serviced well by road, with two major State Highways and two short motorways. Find out more about vehicle moving services to ship your car to New Zealand.