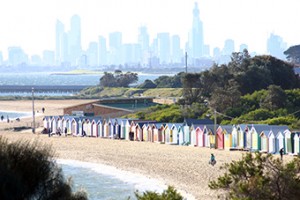 As you might expect for a city of its size, there is excellent transport in Melbourne. So whether you’re importing your own vehicle, buying one out there or simply going to rely on public transport, you’ll always be able to get around one way or another…

Car: By far the most popular mode of transport in Melbourne, particularly for those that reside in the outer suburbs. The extensive network of freeways and arterial roadways are well designed to keep all areas of the city and surrounding areas connected.

Rail: A network of 200 stations over 16 lines serve Melbourne’s public commuters. Flinders Street Station is the city’s busiest railway station, and there are good links to the outer suburbs as well as Sydney and Adelaide.

Trams: Melbourne’s tram network is, in fact, the largest in the world. The heritage trams operate on the free City Circle route and are intended mainly for tourist travel. Heritage restaurant trams serve the city and surrounding areas during the evening.

Buses: Serving nearly 300 routes, the bus services that run throughout Melbourne are mainly used by those living in the outer suburbs to fill in gaps not covered by the rail or tram services.

Port: The Port of Melbourne is Australia’s largest container and general cargo port, so it stands to reason that ship transport in Melbourne is imperative to the city’s overall transport system. Tourists and locals can also make use of the regular cruise ships that run from Station Pier on Port Phillip Bay, as well as the passenger ferries that run to Tasmania. Water taxis are also available, running along the Yarra River and across Port Phillip Bay.

Air: As well as the four main airports that serve international and domestic passengers, there are also a fleet of smaller airports and cargo airlines.

Bike: Established in 2010, many of the city’s locals take advantage of the new bicycle sharing system which enables cyclists to travel along a sophisticated network of segregated road lanes making safer transport in Melbourne for cyclists.

For more information on moving to Sydney or anywhere else in Australia, check out the rest of our guide to moving to Australia