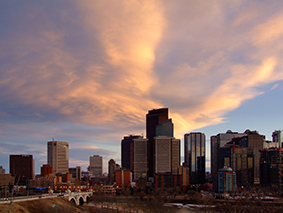 When it comes to transport in Calgary you'll be pleased to hear it is a well connected area! Whether travelling by road, rail or air, there’s a method to suit every requirement…


Transport in Calgary By Air:

Calgary International Airport (YYC) is located in the northeast of the city and is one of the main transportation hubs for central and western Canada. Serving all of Canada’s major cities, the United States, Europe, Central America and Asia, this is one of the busiest airports in the country.

Transport in Calgary By Rail:

Public transportation around the city is excellent, with Calgary Transit providing links to all the major routes via bus and the C-Train, Calgary’s light rail system. Consisting of four lines, the C-Train is one of the most popular forms of public transport in the city.
Calgary is also served by the Canadian Pacific Railway, which makes it an important hub for freight, and also the Rocky Mountaineer and Royal Canadian Pacific rail tour services.

Transport in Calgary by Road:

As you would imagine for a city of its size, the citizens of Calgary are well connected to the outer suburbs via a network of residential roads, freeways and expressways. However, using the roads as a first-time driver here might be slightly confusing as none of them seem to correlate with the numbered grid system that the streets are built on.

If you’re not taking a car or don’t drive then you’ll be pleased to know that the city’s bus system operates around 800 vehicles across 160 routes, making it easy to get just about anywhere at almost any time.

If you're looking to buy or rent a car when you get to Calgary Bournes have a great partnership with International Autosource offering you great money saving opportunities and help with the process of buying or renting a car in Canada.

Alternative methods of transport in Calgary:

If you’re more of an active person or don’t have far to travel each day then Calgary is made for you – with a chain of multi-use paths spanning across 395 miles of the city, you can cycle, walk or even (for the more adventurous types) rollerblade safely across the city.

If you need more information about moving to Calgary or anywhere else in Canada, then visit our moving to Canada guide. If you're ready to move and need help with your move contact us for a free quote